In 2020, LG Electronics Australia awarded Colin Greef of Canberra, ACT as a deserving LG Local Legend. Colin knows first-hand the magic music brings to the lives of others; as a Navy veteran of 33 years he has found solace in strumming his guitar, which ultimately led him to share this gift with others.

His pay-it-forward journey began upon leaving the Navy when he joined a small group of veterans who met once a week to play guitars. The meet-ups are through Soldier On, a group that supports the veteran community and their families, including those who have served and continue to serve in the Australian Defence Force. It was through the weekly gatherings that Colin discovered the healing playing these instruments provides veterans, especially those who suffer from post-traumatic stress disorder (PTSD). 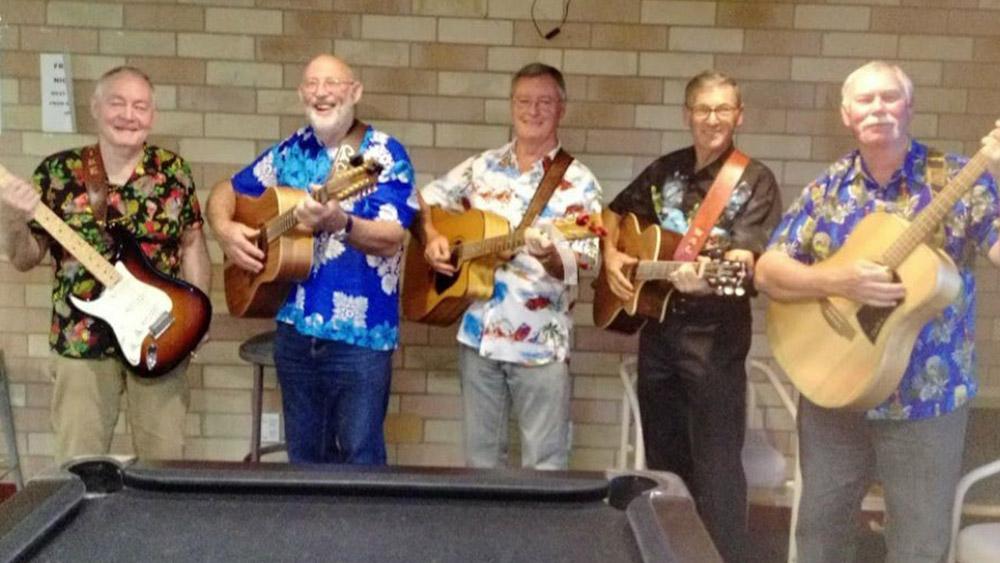 Colin then considered if guitar playing was benefitting veterans could these instruments support other groups too, such as disadvantaged children? In the interim he found guitars laying around, not utilised, that could be refurbished and gifted to those in need, which led to teaming up with Soldier On and seeking donations to support the cause.

Over the last two years, Colin and a group of volunteer veterans from Soldier On have sourced, collected, repaired and donated more than 150 guitars and ukuleles to children and veterans across the ACT and New South Wales. In early 2020 when the bushfires ravaged through communities in New South Wales, Colin and other volunteer veterans travelled to South Coast schools (from Nowra to Eden) to hand deliver refurbished guitars to children who had lost everything. Prior to this, the team of volunteers were supporting children in drought affected areas.

We spoke to Colin to learn more about his generous act of kindness: how he is fostering musical talent in children who would not otherwise have access to these instruments, meanwhile spreading joy to veterans. Although his initiative of restoring and donating guitars may have started two years ago, his journey of giving back to the community started several decades ago. You can find out more by reading his inspiring answers below:

CW: I joined the navy at 16 years old and it soon became clear that the Defence Force was called upon not only to defend our way of life, but also to help people in times of need such as during natural disasters. I was fortunate to travel the world and witnessed the poverty some people and children lived in.

The Navy gave me a good standard of living and I never went short of food or medical attention. It was then I thought I could give something back to those in the community who were not as lucky as me. 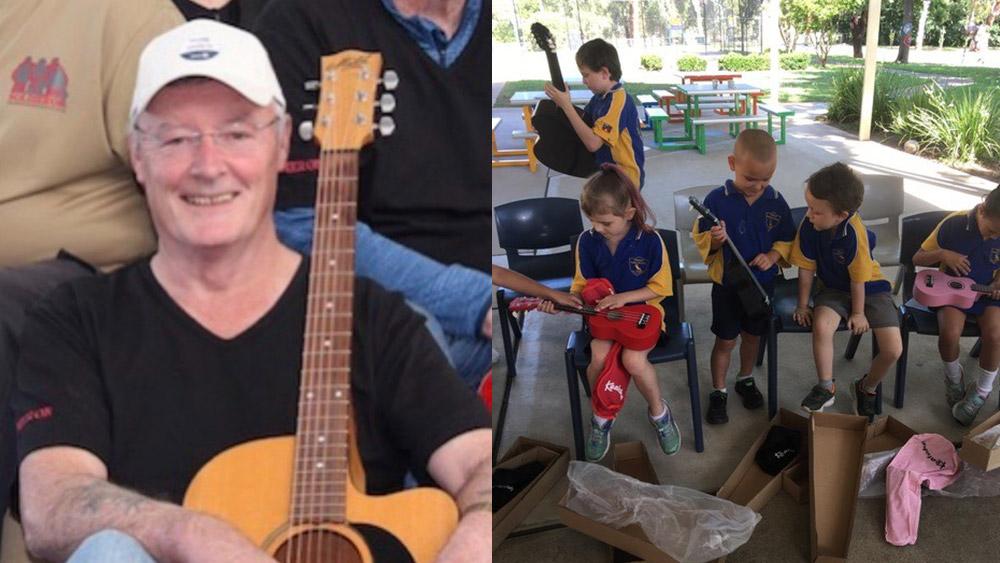 I first started helping with community work in 1982 when I was posted to HMAS Albatross in Nowra. I wanted something to do outside of my career so I joined the local APEX club. It was a great way for my family and me to meet new people who had the same interests in helping the community. I spent six years in APEX raising thousands of dollars for local groups and individuals in the community.

During this time a friend of mine gave birth to a son with Down Syndrome. We soon discovered that there was very little support in the local area for children with special needs. Together with Rick, the boy’s father and other Naval personnel, we came up with the idea to ride pushbikes from Brisbane to Nowra which then started ten years of fundraising for children with special needs. In the ten-year period we raised almost a million dollars for this cause.

CW: Following my postings in Nowra and then Sydney, I was posted back to Canberra and joined the local Lions Club where we started a market. This was a great success for many years, and we raised thousands of dollars for groups and individuals in the community.

During this time, I was sent on a United Nations Peacekeeping mission to Cambodia. The country was devastated due to the carnage Pol Pot inflicted on the population. The people were doing it really tough and the children had nothing. I bought a cheap second-hand guitar and at night we would have a bit of a sing-a-long and the children would sit around and laugh and clap their hands.

Upon leaving the Navy I joined a small guitar group of veterans who meet once a week to play a few songs, have a laugh and a coffee. It was during these meet-ups, I realised playing guitar was great therapy and soon discovered we had spare guitars lying around I could refurbish and re-home.

That’s why two years ago, I decided to ask the public for any donations of guitars and ukuleles they could provide so that my team of volunteers at Soldier On could give them to disadvantaged children who love music. This included getting in touch with a local magazine, City News who did a story on the concept and the response from the Canberra public has been amazing.

CW: In the short period since I started the program, I have given away over 120 guitars and about 35 ukuleles to disadvantaged children in need. We have donated guitars to children in drought affected areas and when the fires hit the South Coast of New South Wales, the local Soldier On Events Co-ordinator and another veteran and I spent three days driving down the coast to give out 42 guitars and 20 ukuleles to children and schools who lost theirs in the fires.

Additionally, as part of my volunteer work with the Australian Federal Police as a Justice of the Peace, I have donated an extra 10 guitars to children taking part in a six-month education program run through The Police Citizens Youth Club of Canberra who will use the instruments to celebrate the completion of the program with a concert for their family and friends.

Have you come up against any challenges?

The main challenge is collecting guitars, especially outside the Canberra area, and getting them shipped to our Soldier On office. I do not feel comfortable asking people in Sydney to donate guitars and pay for postage.

Also, the 2019/20 Bushfires across the South Coast of New South Wales and the COVID pandemic affected us two-fold; the need for guitars dramatically growing due to schools and families losing musical instruments in the fires - and distribution has been difficult due to travel restrictions brought on by the pandemic.

In the future I would like to amplify the program nation-wide. Soldier On’s CEO, Ivan Slavich has done a wonderful job communicating the significance of Soldier On nationally whilst opening offices in all states. He has been very supportive of the guitar initiative and I am hoping to work with him to replicate the program in every state to spread the gift of music around the country.

Just to finish off

My wife Avril and I got married on Christmas Eve and have just celebrated our 49th wedding anniversary. Since 1982, to celebrate our anniversary, we dress up as Santa and Mrs. Clause and donate gifts to children in our community. This simple activity has given us a lot of pleasure over many years 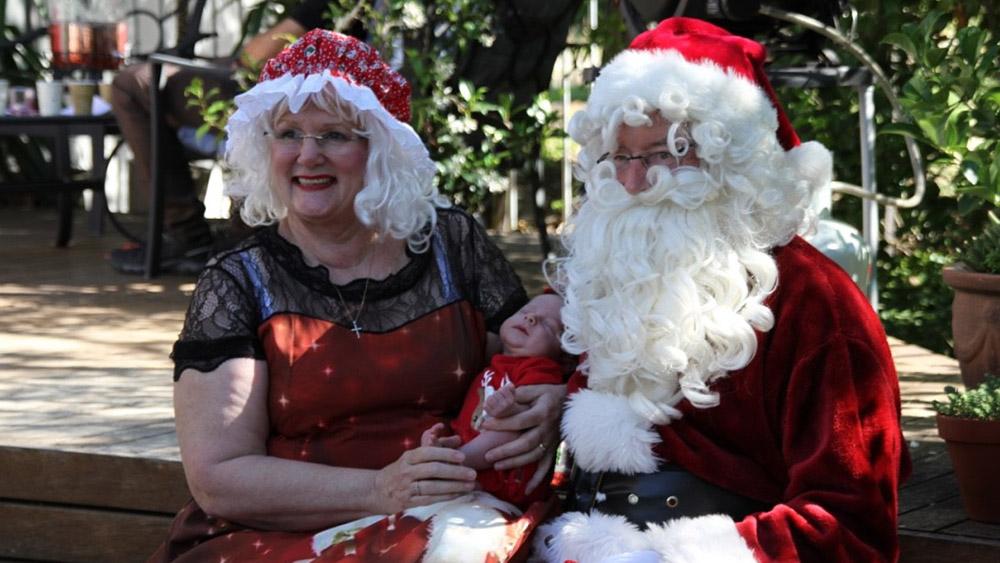 From all of us at LG Electronics Australia, we would truly like to thank Colin for his ongoing support to children and veterans in need. We wish him our best as he continues to make a difference through sharing his passion for music. To find out more about Soldier On visit, soldieron.org.au and on Facebook. And to organise a donation of a guitar or ukulele, contact Colin Greef on 0455 143 581.

If you know someone like Colin making positive contributions through their time, actions, talents and/or dedication to others, you can nominate them to be named an LG Local Legend by visiting www.lglifesgood.com.au/nominate-a-local-legend. We are looking forward to celebrating their achievements with you soon!