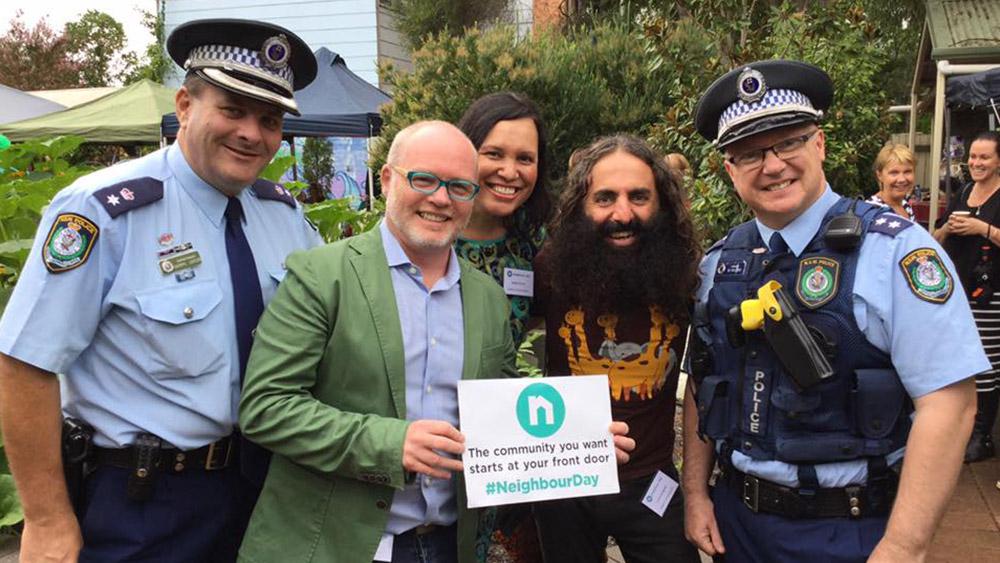 LG Electronics Australia recognised and rewarded Andrew Heslop as an LG Local Legend in September 2020 for selflessly supporting communities around the country over the last decade. Andrew was inspired from day one by his grandparents, who were actively involved in their community, and has continued to walk in their footsteps throughout his life. Continuing his family’s legacy of giving back, Andrew is the type of person who is always thinking of others and in 2003, started Neighbour Day, an initiative now run by Relationships Australia that aims to reconnect communities.

Andrew established Neighbour Day in 2003 when he saw there was a gap in the way people interacted with their neighbours, especially when it came to those that lived on their own. Therefore, with Neighbour Day he wanted to create a strong sense of community by encouraging Australians to talk to their neighbours and bring back the sense of camaraderie in neighborhoods all over the country.

When the nation was faced with unprecedented danger during the 2019/20 summer due to the widespread bushfires, Andrew was there to give back. He spent his time as an ABC Emergency Broadcasting announcer, bringing communities under threat of bushfires the latest information so listeners could make decisions about their safety, and that of their family. During the height of the COVID-19 pandemic, Andrew was there to help in any way he could again. He cared for a 70-year old friend whose partner was stranded in Hong Kong, by cooking meals and taking him to medical appointments, the pharmacy and shopping.

With a lengthy laundry list of examples of how he’s given back in his community, it is easy to see why Andrew has been recognised for his community support, and we spoke to him to learn more about his efforts – how he got started, his greatest challenges and what he has planned next: 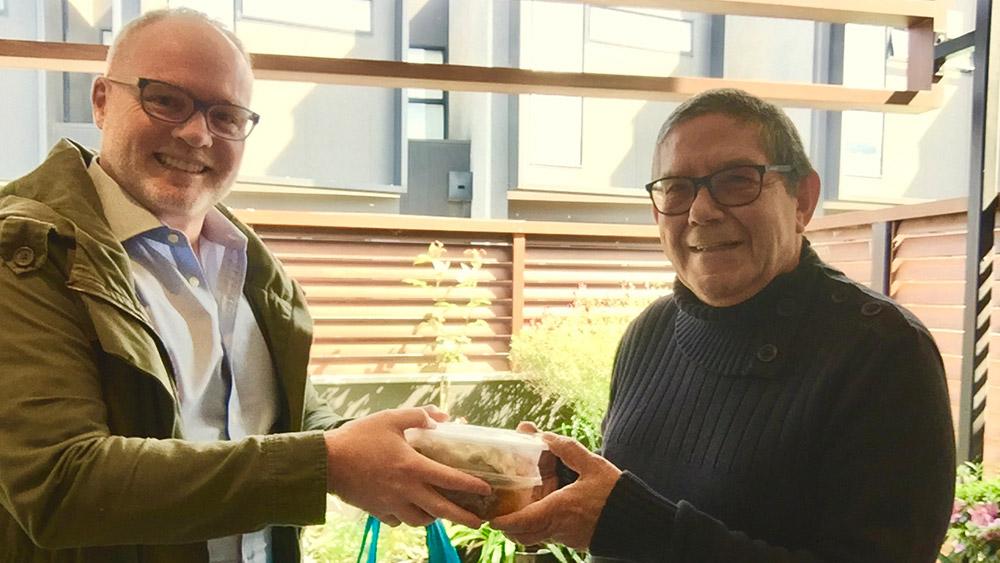 AH: In researching his 2010 book ‘Disconnected’, Dr Andrew Leigh found 43 per cent of us will become volunteers if we see our parents, or grandparents, getting involved but only 23 per cent of us will step up if they haven’t. Giving back to the community is how I was brought up, as a young boy I saw my grandparents being actively involved and I saw the personal joy they got from volunteering or donating. They taught me that when you have the capacity to do so, you should always give back. My grandfather was involved with the local RSL and my grandmother had been an Australian Red Cross volunteer since the Second World War. She would cook food for the Aboriginal community who camped out on the beach at Semaphore over summer, or she would be organising blankets and clothes in winter. She was always doing something for the community and so this has been carried down through generations in my family.

LG: How did you come up with the concept for Neighbour Day?

AH: I came up with the concept for Neighbour Day after hearing the story about how a welfare check by Victoria Police in March 2003 led to the discovery that Elsie Brown had died alone in her home. The state coroner later found she had passed away in early 2001, so for over two years, Mrs Brown had been forgotten by neighbours, friends and family as the piles of uncollected mail, newspapers and store catalogues built up around her front door.

News of her death created headlines right across Australia with people genuinely shocked an elderly woman could die and not be missed. Despite the thousands of people who walked past her home no one connected the piles of evidence with something being wrong behind Mrs Brown’s door. At this time, I had recently left my role at Australian Red Cross and felt we urgently needed to reconnect our communities - technology at home was easily putting us in contact with people on the other side of the world but we appeared to have lost the ability to know the people on the other side of the fence.

So, I wrote a letter to the editor of The Age advocating the last Sunday in March become National Get to Know Your Neighbour Day. My now recently retired ABC colleague, Jon Faine then called me up to do an interview on ABC Radio Melbourne and the initiative snowballed from there.

In late 2013, I gifted Neighbour Day to Relationships Australia, who now run it each year. I honestly thought it would last a year or two, that Australians would become tired of the idea, but it grew. I think it was received so well because it wasn’t fundraising, all you needed to do was talk to your neighbour, introduce yourself and take it from there – simple, easy and something we could all do.

Now, 18 years later, 2021 will be the 19th annual event - it gets bigger every year with more councils and shires, community organisations and residents taking part. All you need to do is just say g’day, but there are also street parties and barbecues and lunches - all sorts of activities decided by neighbours talking with each other and planning together. I love it because it brings communities together.

AH: The global coronavirus pandemic will change Neighbour Day in 2021. Social connection was the major theme in 2020 and it will continue next year, but with a new message - ‘Every day is Neighbour Day’.

If I look back to the beginning, my biggest personal challenges were time and resources. For 10 years, I met all costs by working full time and putting my salary from my employer into Neighbour Day, concentrating on it after hours and on weekends. I took annual leave days to travel across the country to meet with prospective corporate sponsors, philanthropists, benefactors and politicians. Everyone wanted to be associated with it, but no one wanted to help me fund it. It’s not an uncommon experience for inventors and now social entrepreneurs - in fact anyone with an idea trying to get through the start-up phase. The personal toll was immense and ultimately devastating.

The biggest challenges for residents were the councils and shires determined to make it hard for neighbours to hold street parties or events in local public spaces. This involved requiring them to take out public liability insurance policies or they shut down community ideas or proposals because of ‘risk’. Or gave quotes to close streets or section off parks that ran towards $100,000! Overwhelmed and upset, residents tearfully came to me for help or advice all the time. That was upsetting because so many councils and shires across the country were making it very easy for neighbours to do all those things. Some provided barbecues and cricket sets; or sent rangers to set up bollards and bunting; funded picnics or exhibitions or fetes and fairs, and they didn’t ask for one cent from residents in return.

However, by 2013 it was time to bring in new ideas and fresh thinking, so I held a national Expression of Interest process to find a new home for Neighbour Day. Around 30 interested organisations stepped up and from those I selected the top five. Relationships Australia most closely shared my vision, they could see the longevity and were able to provide the stability and commit resources I wasn’t able to achieve. I wasn’t sad to let go; I was immensely proud to pass the baton to the team. They have done an extraordinary job in expanding Australia’s annual celebration of community. 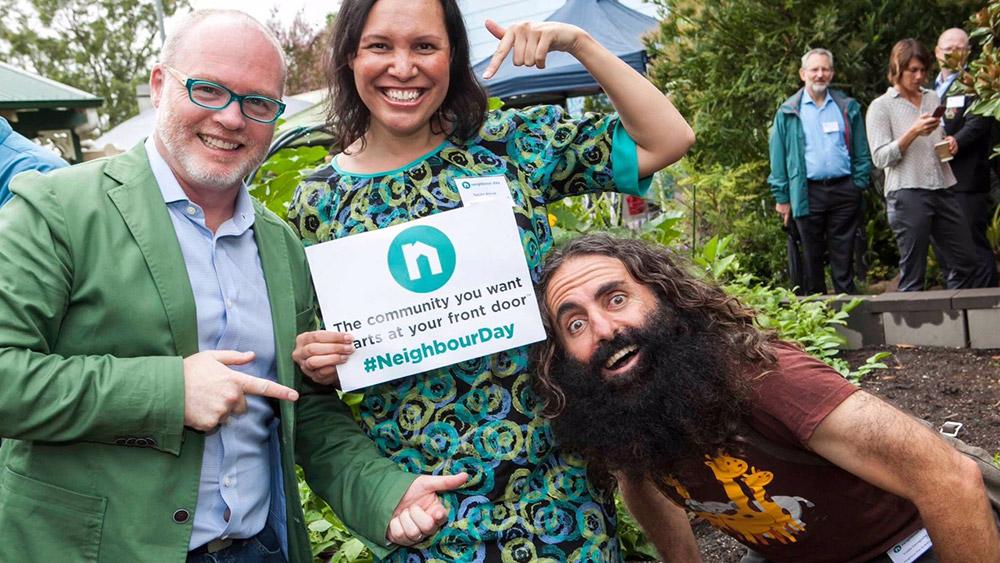 AH: Early findings from Australian National University’s evaluation of Neighbour Day this year revealed respondents reporting a decreased sense of mental well-being; an increased sense of loneliness; and yet an increased sense of neighbourhood satisfaction. It also found survey respondents saw the importance of connecting with neighbours for the benefit of their community, and individual, wellbeing. When compared to 2019, people reported that getting involved in Neighbour Day this year was less about having fun and meeting new people, but more about reaching out to support neighbours during the pandemic as well as benefits for their own wellbeing.

Mid-last year, emergency agencies were forecasting a horrific bushfire season ahead. When that began to eventuate, and there were simultaneous fires in seven out of eight states and territories, I think people suddenly became much more community aware. They could see the devastation unfolding, could see towns burning, and each morning they could smell the fires in urban areas.

What’s next for you and your initiative?

AH: Neighbour Day will continue to evolve, and I will stay connected for as long as Relationships Australia is happy to have me as one of the Ambassadors. What I’ve always loved about it is that it empowers us all to create the kind of community we want to live in. It’s about participation and conversation. How you choose to be involved is entirely up to you and your neighbours to decide.

Now, as an Australia Day Ambassador too I’m finding how entrenched the street party is in communities across the country – for Christmas, New Year and Australia Day, so many people tell me about what it is they do with their neighbours. This year I was the Ambassador to Howlong, NSW and after all the morning’s official activities one of the Councillors put on a huge informal BBQ at home that afternoon for all his neighbours and friends. It was great to see and a delight to be included.

LG Electronics Australia would like to thank Andrew for his tireless efforts helping communities to reconnect with their neighbours. And at the same time, everything else he does in between as a reliable member of the community in times of crisis. We wish Andrew our best as he continues his passion to help connect communities all over Australia.

For Neighbour Day 2021, Relationships Australia are asking everyone to reach out and to highlight the importance of social connection. Find out how you can start connecting in your neighbourhood at Neighbour Day and follow on Twitter, Facebook and Instagram.

If you know someone like Andrew making positive contributions through their time, actions, talents and/or dedication to others, you can nominate them to be named an LG Local Legend by visiting www.lglifesgood.com.au/nominate-a-local-legend. We are looking forward to celebrating their achievements with you soon!